Back to History & Heritage 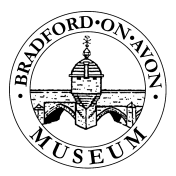 The town’s Museum is a treasure trove of historic items, giving a visitor a peek into Bradford on Avon’s varied history. The Museum is run by a dedicated team of local volunteers to catalogue the natural and historic heritage of Bradford on Avon and the surrounding villages. Amongst the collection is St Christopher’s Shop, a replica of a local Bradford on Avon pharmacy  The Christopher family had an antiquarian interest in pharmacy and many other subjects and kept many of the old items from the past. The shop finally shut its doors in 1986 and the items and some of its interiors were moved to the Bradford on Avon museum! The museum also has seasonal exhibits highlighting Bradford on Avon exciting past.

School and other group visits at other times by prior arrangement

The opening is subject to availability of volunteers